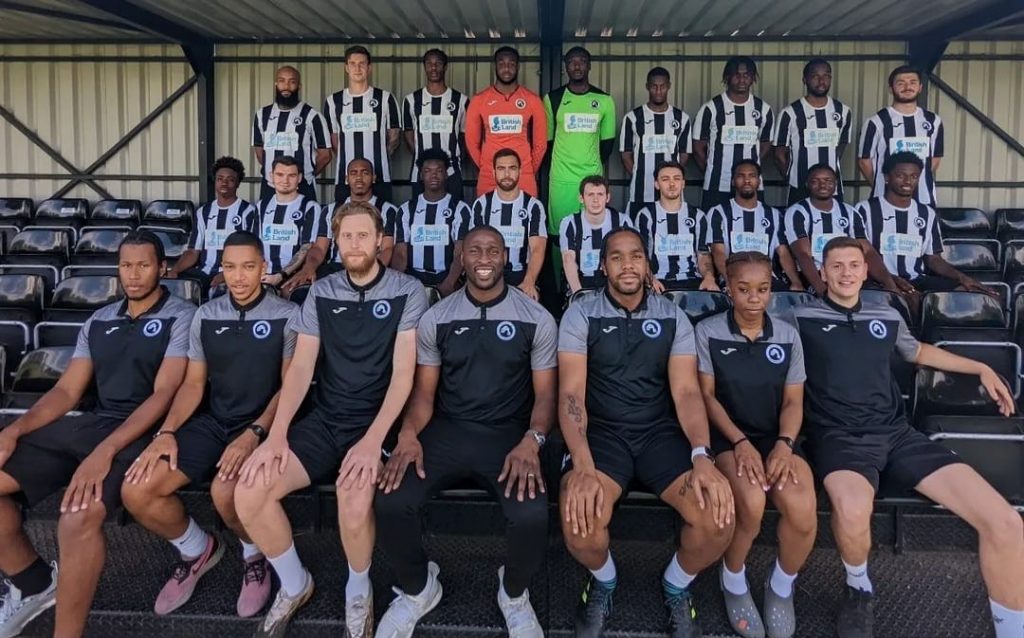 Fisher FC’s origins lie in the Fisher Catholic Club for Boys, founded in 1908 by Mr Norman Potter, aided by Michael Culliton, headmaster of the Dockhead School, Bermondsey, to provide sporting and recreational facilities for underprivileged youths. It was named The Fisher Club in memory of St John Fisher, and was supported by the Fisher Society – the Catholic Society at Cambridge University. The first location of the club was an old engineering shop in Rose Court and was entirely staffed by volunteers. The ground floor was used for athletics, with the first and second floors used for recreational games such as ludo and draughts.

Friar Stephen Rawlinson, a chaplain to the Fisher Catholic Club, persuaded the Abbot and Community at Downside in Stratton-on-the-fosse near Somerset, to take over responsibility for the club. Their reorganisation of the Fisher and Downside Clubs formed the Downside Settlement, supported by subscriptions from Old Gregorians (ex-Downside School pupils). The Settlement Movement was a social movement whose main objective was the establishment of “settlement houses” in poor urban areas, in which volunteer middle-class “settlement workers” would live, hoping to share knowledge and culture with, and alleviate the poverty of, their low-income neighbours.

The first sporting event of any note was a home inter-club boxing match against St. Patrick’s Club, Wapping in a 3-3 draw. The first football match on record was also against St. Patrick’s, a 2-1 win for Fisher at Norbury, though a fascinating transcript of an earlier fixture also survives:

It was the very first football team “The Fisher” put on a football field,……It was a very good team. Its defence I would describe as reliable and clever, and its forward line would never have been arrested for loitering or hanging about near the goal, as the game very early in their career against Mauzi’s (Manze) shows when the lads won 29-0. Mauzi’s were the far-famed eel merchants and meat pie manufacturers of Tower Bridge Road and Blue Anchor Lane…

The team competed in various district leagues before moving to the Parthenon League where they stayed until 1965. At this point the club folded and reformed, this time based in Mitcham, joining the Western Section of the Kent Amateur League for the 1966-67 season.
Fisher were elected to the Spartan League in 1974 and won back-to-back championships in 1980-81 and 1981-82. The latter season coincided with a move to the purpose-built Surrey Docks Stadium.

In 1986-87 they won the Southern League title and were promoted to the Football Conference (Blue Square Premier). The following year brought another run to the first round of the FA Cup where the Fish once again lost out to a Bristol side, their nemesis this time being Rovers who won 3-0.

Fisher’s success came to an end in 1990-91 when they finished bottom of the Conference and dropped back to the Southern League Premier Division. The following season brought a second successive relegation, to the Southern League Southern Division, where they remained until the turn of the millennium, generally finishing in mid-table.

The following two season saw mid-table finishes, with Wayne Burnett taking over the managerial hotseat in February 2004. The club was moved to groundshare with Dulwich Hamlet while planning permission was granted for a new stadium and development at the Surrey Docks Stadium. A raft of top signings followed and the club were successful in 2004-5, winning the Southern League Division One East title and the London Senior Cup. The Fish were promoted to the Isthmian League Premier Division for the 2005-06 season.

The 2006-07 season saw the club finish in 10th place in the Conference South under Edinburgh. Wayne Burnett returned to the club in the off season, and assembled a supremely talented squad. The Fish played superb attacking football, but ended up finishing 4th, and losing to Hampton & Richmond Borough in the play-offs, the side they’d beaten to win promotion two years before.

The close season saw a player exodus, with six of the previous season’s squad moving to Football League clubs. The club’s financial difficulties also came to a head, as massive debts were found to be piling up. The club hadn’t been paying players since November 2008, while a winding-up order for unpaid income tax issued by the High Court was, on 13 March, adjourned for 49 days until 22 April, and then adjourned for a further 21 days to 13 May 2009.
A run of sixteen consecutive league defeats between 19 November and 9 March saw the club eventually relegated on 28 March. At the High Court on 13 May 2009, Fisher Athletic were wound up.

Following a meeting in Bermondsey on the evening of 28 May 2009, a supporters trust was formed to take control of all forthcoming club matters, with 42 founding members. Renamed as Fisher FC and continuing to play at Dulwich Hamlet, but no longer the owners of the Surrey Docks Stadium, the Fish appointed Gary Lisney as manager and finished 13th from 16 in their first season in the Kent League Premier, embarking upon a fine run in the London Senior Cup.

The 2010-11 season was a disappointing campaign for the Fish, and though it started well with a brief run in the FA Vase, a last-placed finish in the Kent Premier League was confirmed on the final day of the season. For the 2011-12 season, former Greenwich Borough manager Steve Firkins was appointed, bringing a coaching staff of Billy Walton and Adam Lawrence. An exhaustive overhaul of the squad ensued and a fine pre-season had hopes high for a good season, however a faltering start and misfortune with injuries saw the Fish struggle to match this early promise. Nevertheless, with a strong second half of the season, Fisher managed their best league placing since reforming, finishing 10th in the Kent Hurlimann League.

Steve Firkins returned with new assistant Gary Davies by his side for the 2012-13 season, but in January 2013 Firkins stepped down from his post for family reasons. Former assistant Billy Walton rejoined the club, and accompanied by joint manager Martin Ford, led the Fish to a final placing of 14th of 17.

The summer of 2013 saw the board taking huge strides in their work to return the club to its spiritual home of Bermondsey. At its AGM, the club unveiled proposals for a new community football facility at the St Paul’s playing fields site, just over the road from the old Surrey Docks Stadium, working with new SDS freehold owners Fairview Homes on a scheme to redevelop both sites together, and bring Fisher home.

Back on the pitch, the 2013-14 season saw Billy Walton in sole charge as Ford departed to join the management team at promoted Erith & Belvedere. Familiar struggles saw Fisher once again come in 14th at the final reckoning in the renamed South Counties East Football League, but a run in the Macron Challenge Cup came to a dramatic end in a thrilling semi-final. The Fish came from 0-3 town to win 4-3 in the first leg before finally succumbing to the competition’s eventual winers Beckenham Town 4-6 on aggregate.

In the summer of 2014, Southwark Council’s Planning Committee unanimously approved plans for the new developments at the sites on Salter Road, bringing a return to Rotherhithe within reach a decade after Fisher Athletic’s former owners uprooted the club to East Dulwich. As the 2015/16 season drew to a close Fisher played out their final game at Champion Hill, ready to complete the club’s rebirth by moving back to Rotherhithe.

St Paul's Sports Ground was a success but the team could not produce the goods on the field. 2016-17 saw Fisher finish second from bottom and get relegated to the First Division.

The 2017-18 season saw Fisher end in 3rd place in the First Division. Luck was on the side of the club though as a restructuring further up the pyramid meant that it would be a surprise promotion and a quick return to the Premier Division. They then shocked many in the 18/19 Season by finishing in a surprising 3rd place while having the best defensive record in the League.

With 2019/20 made null and void due to Coronovirus and the 2020/21 campaign ending in similar fashion we now go into the 2021/22 season aiming to continue our progression as a club.